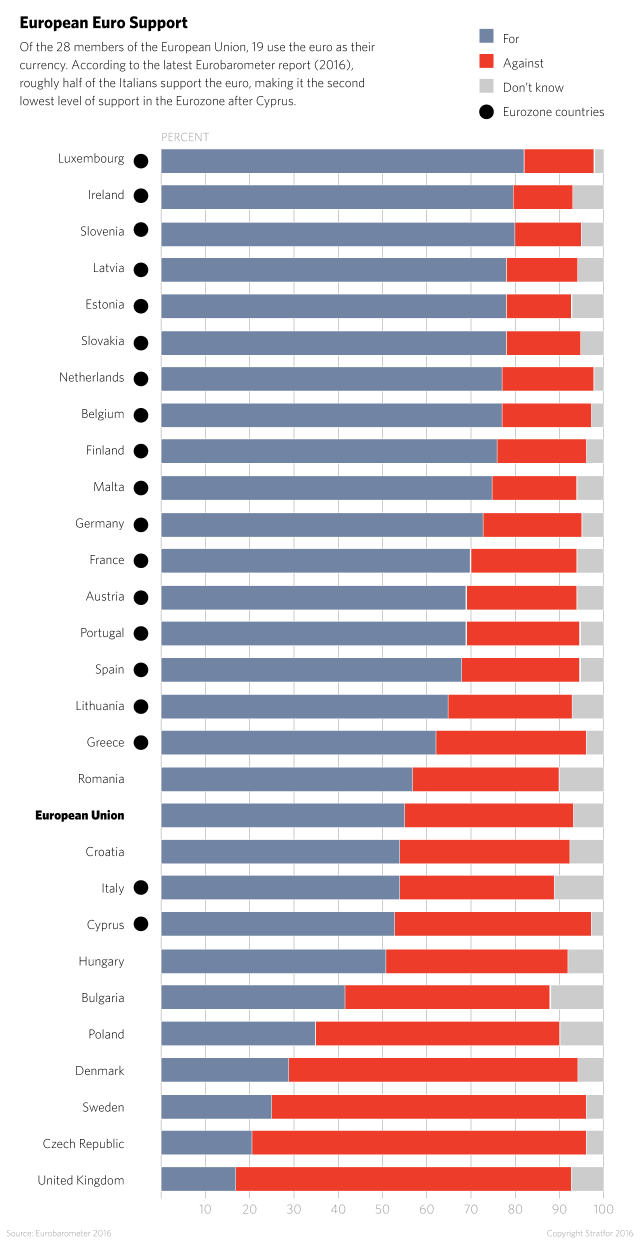 At a time when Europe is still processing the results of the Brexit referendum and the U.S. election, Italy has become yet another source of uncertainty for the Continent. On Dec. 4, the country will hold a referendum on several constitutional reforms. The goal of the proposals, introduced in 2015 by Prime Minister Matteo Renzi’s government, is to ensure that future Italian governments are made more stable by reducing the powers and size of the Senate. Yet the reforms meant to reduce uncertainty in the country are raising questions about its future, mainly because Renzi has promised to step down if the Italian people vote against the reforms.

If Renzi’s resignation leads to early elections, their outcome could affect the future of the eurozone. The Five Star Movement and the Northern League anti-establishment parties have promised to hold a referendum on Italy’s membership in the currency union if they rise to power. A third opposition party, Forza Italia, is also critical of the currency area and may choose to support a referendum as well. Opinion polls suggest that of all EU members, Italy’s support for the euro is one of the lowest, which means that in the event of a popular vote, its continued participation in the eurozone would not be guaranteed.

Depending on the referendum’s results, Italy and, by late next year, France, could be controlled by political forces that want to leave the currency union (and, in the case of France’s National Front party, withdraw from the European Union). Under these circumstances, the bloc would face a massive restructuring effort to adapt to its new political reality. It would involve repatriating some prerogatives to national governments, and potentially ending the eurozone or replacing it with smaller regional currency unions. Though the complete dissolution of the European Union is still unlikely, it cannot be completely ruled out. No matter what happens on Dec. 4, and regardless of the electoral results in France and Germany next year, the anti-establishment forces that proved so strong in the United Kingdom and United States will continue to threaten the continuity of the European Union.